Utley3 back at the Hole in the Wall !! 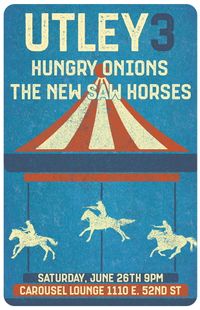 UTLEY3 with Hungry Onions and The New Saw Horses

Live music is back at Austin's historic Carousel Lounge! Hungry Onions at 9pm, followed by UTLEY3 and The New Saw Horses closing out the show.

UTLEY3, Crack Pipes and The Differentials at Black Sparrow

Supplied 4/4 timing for the Texas Instruments (1983-1996), the Golden Apples (1999-2006), as well as various recording projects. Played clubs from Chicago's Metro, NYC CBGB's, LA's The Roxy and lots of places in between, hitting 46 of the 48 of the continental US. Currently resides in the namesake village of Utley, TX, a charming hamlet near Austin, where he workshops jokes and moves books slightly to the left.

Formerly of His Boy Elroy, The Fontanelles and The Keytones, playing clubs in Central Texas and beyond. Past winner of the prestigious Kerrville New Folk Songwriting Competition, she divides her time between Austin and Utley, cycling the scenic roads of Bastrop County.